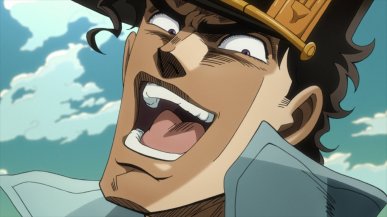 The greatest episode in Jojo history starts off with the Zenyatta Mundatta brothers (also known as Oingo Boingo) looking into the all-knowing comic book to see what will happen next. Easy, all the older brother has to do is poison the Jojo gang’s tea. Kakyoin and Avdol are in the hospital, so it’s just Polnareff and the two Jojos.

The characters then go through a hilarious scene where Joseph and Polnareff keep going back and forth on what to drink, to rip-roaringly funny results. Finally it looks like the Oingo Boingo guy got them, but Iggy the dog comes in at the last moment to distract everyone and accidentally SAVE them.

No matter, the all-knowing comic book has a new prediction: the older brother will plant a bomb inside an orange, then Jotaro’s head will explode. I, for one, am really looking forward to this, given my hatred for the useless Jotaro. But as it turns out, the Oingo Boingo guy gets caught trying to plant the bomb, so he uses his stand to make himself look like Jotaro.

This means for the rest of the episode, Oingo Boingo has to pretend he’s Jotaro in the backseat of the car being driven by Joseph, all the while trying to blow them up. HIlarity ensues, with the great finish being Polnareff throwing the orange out the window and blowing up Oingo Boingo. In the end, the predictions did come true, just not the way Oingo Boingo wanted.

I purposely left out a lot of the details from this episode because a) I’m lazy and b) you need to watch it yourself to take in all the humorous situations these characters find themselves in. There was a laugh-a-second in this episode, coming from Joseph, Polnareff and Oingo Boingo. In the end, it turns out to be the best episode of Jojo yet.

Character of the episode: The Oingo Boingo/Zenyatta Mundatta older brother

No looking up his actual name due to spoiler issues. If I Google his name, I’m sure to get spoiled on something. I don’t want that to happen, so I’ll leave you in suspense as to what his name is.

Jojo manages to make a boring old trope of a genie in a lamp giving 3 wishes into an actually very solid episode. This time on Polnareff’s Bizarre Adventure, the main character Polnareff finds a lamp and scratches it, pulling out a Stand that is like a genie. The Stand is very sarcastic and snarky to Polnareff, which is great. He asks Polnareff to make wishes, which he does. The first is to become rich, which seems to work out well. But the second two are to bring back his sister and Avdol. These don’t work out so nice for him.

This episode was a fresh take on the “genie three wishes” trope, and I loved how Polnareff subverted the trope on several occasions. I’m still waiting for the day someone is smart enough to make their first wish to be “give me more wishes,” but until then, this episode will do.

Joseph and the Polnareff gang buy a car in the United Arab Emirates, only to sell the super-expensive car for a bunch of camels and some water. That’s right, they’re going on camel-back through the desert. As Boston Rob once said, “this can’t end well.”

After some amusing antics with Joseph trying to get on a camel using tips from Lawrence of Arabia (“We Didn’t Start The Fire” check!), the boys get halfway out in the desert before they notice that the sun is still up at 8 pm at night. They figure out that the sun is a Stand, so they go into a foxhole to stay out of the heat.

They waste a lot of time there, not knowing what to do, before three of them (everyone but Joseph) breaks out in laughter. The Stand is simply a mirror, and once they shatter the mirror, it goes back to being night again. Let me know how this works, because this makes as little sense as some of the crap in Star Wars: The Last Jedi. How could the Stand be reflecting a sunny desert if it’s night out? I don’t get it.

In any case, this was a very funny episode, a very enjoyable one. Sure, it didn’t make much sense, but Jojo was never made to make much sense. It’s just supposed to be fun, and that’s what this episode was.

Character of the episode: Joseph

Jotaro continues to have to do embarrassing things for Dan of Steel. Why Jotaro isn’t helping out the other two guys try to get the Lovers out of Joseph’s brain, I don’t know, but Jotaro obviously enjoys doing all these menial tasks for Dan of Steel. He keeps track of them, for his “big payback” later.

Kakyoin and Polnareff succeed in getting the Lovers out of Joseph’s brain, and eventually Dan of Steel is left begging for mercy (as a ruse). Jotaro figures him out, however, and doesn’t let him do it again. Then comes the “big payback.”

I couldn’t wait to find out what this “big payback” might be. Would it be something like the time in Bleach that Squad 12 Captain Mayuri Kurotsuchi used his powers on the one Arrancar so that he would experience getting slashed by a zanpakuto for centuries? Nope, it wasn’t anything cool like that. Just Jotaro’s stand punching hundreds of times. That’s the type of stuff we see on Dragon Ball all the time, and it hardly hurts. What a big disappointment.

In any case, I enjoyed this episode, but surely the writers could have come up with something better than a bunch of punches.

Character of the episode: Jotaro (finally!)