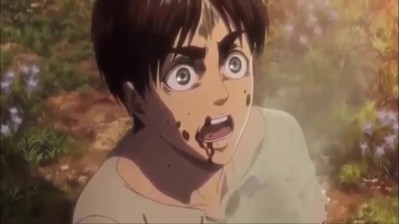 The end of this season of Attack on Titan couldn’t have come sooner. What had been an entertaining second go at it ended up in utter confusion. It seems to me that in exchange for lucid activity, we get these big confusing action-filled scenes with Ymir and Christa continuing their obsession for each other. I’m sick and tired of Ymir and Christa at this point, I got the point about 5 episodes ago that they’re in love.

Oh, and don’t call her “Christa.” Call her “Historia.” Even though there has been absolutely zero effort made to help us understand why that matters in the least bit! Seriously, can you think of a single moment in any episode this season where you can point to and say “oh, now I see why she wants to be called that”? The manga doesn’t count. I don’t read the manga, nor will I, so everything I know is on screen. And if there isn’t proof of it on the screen, then to me it just seems like a waste of time.

Unfortunately, despite a great start, Attack on Titan‘s second season ends up fizzling out as a disappointment. Where do we go from here? A third season where questions are answered? Or a third season that mimics the second season by raising more questions than answers? I’m betting on the latter, but hopefully this most overrated of anime can do something right next time. Third time’s the charm, right?

Character of the episode: Eren 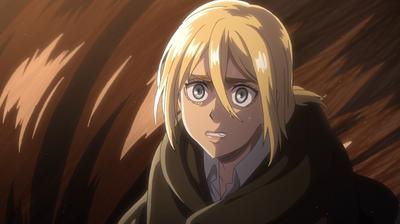 So I like to start a lot of my sentences with the word “so.” But never mind that, this has started to get boring. Just in time, too. I’ve never been more happy to get Jojo back on the air. Not that Jojo was ever bad, of course. Just that Attack on Titan‘s second season had so much promise, and that ended when Christa and Ymir took over the show.

Look, for the 300th time, I get it. Christa and Ymir are a big-time yuri couple. Do we really need this hammered home any more? Once it’s made this painfully clear, there’s no reason to keep on beating us over the head with it. Can’t we at least get to some lucid action around here? Instead we have Christa obsessing over Ymir and Ymir obsessing over Christa (actually Historia, but it’s not as if we’ve been told why that name change matters). And then we’ve got Mikasa obsessing over Eren. Why in this series are certain characters obsessed with others, and that’s pretty much the entirety of their uniqueness as a character?

Attack on Titan is no longer enjoying the honeymoon it had when it came back on the air. Now it’s back to being a mediocre series. Actually it’s probably still better than the first season, which is something. Still, I got my hopes up for it after it started so well. One episode left to try to change my mind. (Speaking of which, I had a dream about Fullmetal Alchemist: Brotherhood and Al falling in love with May. Proof positive a season can be saved by one episode.)

This week… in… Toonami…

Dragon Ball Super episode 21: Skipped it. The only reason I watch Dragon Ball is for the podcast; there’s no redeeming value of it for me.

Attack on Titan episode 32: Eren’s learned a lot about fighting from Annie, apparently, as he takes on the other traitor Titans. Hange is great as always, and Mikasa is useless as ever. Why wasn’t the first season this good? Rating: ***1/2

Tokyo Ghoul episode 10: Kaneki is kidnapped, and I couldn’t give a crap. Rating: *

Hunter x Hunter episode 54: We’re running out of good episodes of Hunter x Hunter. The show’s about to take a nosedive once this arc officially ends. Rating: ***1/2

Mobile Suit Gundam Unicorn episode 22: It’s over! It’s all over! What a relief. Rating: *

Naruto Shippuden episode 160: Naruto’s still too busy training, so we have to let the minor characters have some screen time, as they hope to put up somewhat of a fight against Pain. Rating: **1/2

Ghost in the Shell episode 15: Another typical episode; not great, just mediocre. Rating: **

Best show of the week: Attack on Titan

Most surprisingly good show of the week: Attack on Titan

Most disappointing show of the week: Mobile Suit Gundam Unicorn

No fewer than four times did Mikasa call out Eren’s name during this episode. In fact, she may have had more “Eren”s than she had lines. And to think I expected her to become my favorite character when I first found out about Attack on Titan. She’s the ultimate one-note character, there for only one reason and nothing more.

But what about the rest of this episode? Can you find anything cuter and funnier than Hange blushing over a Titan (Eren) responding to her? That was another bone thrown to the fans who love Hange. I’ll take it, I like Hange myself.

One problem I’m noticing with this season of Attack on Titan is the prevalence of flashbacks. Look, flashbacks aren’t bad, but there are too many of them at this point. The reason for this one is to show why Eren decides to use Annie’s technique to take down the Armored Titan, but it really seems superfluous.

I still refuse to believe that Annie is all that evil, by the way. I’m holding onto hope that she’s actually justified in her actions. I kind of hope Bertholdt and Reiner are proven innocent, too. Sometimes it’s nice for characters to be morally gray. After all, didn’t we all think the Captains of the Soul Society were villains at first, too?

Pretty nice action in this episode, and great animation along with it. And here’s the thing: we don’t know who’s going to survive, who’s really the enemy, and what the mystery of the Titans is. I’m okay with all these questions. As long as they eventually get answered, by all means, throw the mystery at me. There’s this brilliant anime that I’ll never stop talking about – Shangri-La – that did this to utter perfection (and managed to do it in only 24 episodes).

But let’s talk about the most important thing: Attack on Titan, once left for dead by me after an overrated first season, is suddenly much-watch TV, and a true rival to Hunter x Hunter on the Toonami block.

Character of the episode: Hange