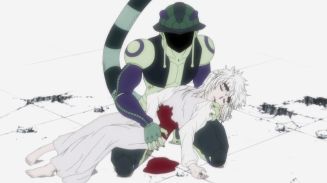 This episode would have been served best by a song from the Death Note soundtrack, “Requiem,” which plays as Rem kills L. Some sort of epic song would have been perfect as the King is finally stripped of his arrogance and brought to his knees in deep concern for Komugi. Suddenly the King isn’t all that scary; he now is, for lack of a better word, human. That’s what this scene gets across, and it just would have been better if it wasn’t stunned silence but rather some good background music.

The rest of the episode was hit or miss. We still have the Matrix going on with everyone moving in slow motion. We still have the narrator over-narrating everything. And we still have the Hunter gang over-analyzing the situation. But that scene with the King and Komugi was so precious that I couldn’t hate this episode. It shows that this series still has some life left in it.

Character of the episode: The King