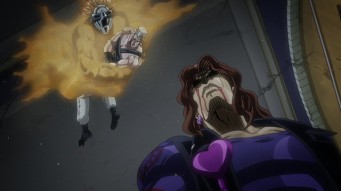 Jojo is overrated; Dio is overrated. But now that we’ve gotten those facts out of the way, let’s talk about this episode.

Basically Avdol and Iggy sacrifice themselves so Polnareff can survive. It’s supposed to be this grand exit for them, but keep in mind that Avdol already died once. I don’t believe for a second that he’s gone. Maybe Iggy, since the creator of Jojo hates dogs and might have a mental illness that causes him to hate animals. But I fully expect to see Avdol again.

As for the rest of the episode, we get more “Oras” which have become extremely annoying, especially in the opening “theme song.” But now Dio has entered the fray, and finally we will have a chance to find out what this guy’s all about. Why is he the most popular villain in anime, when his screen time is nearly nonexistent? It’s time to put up or shut up.