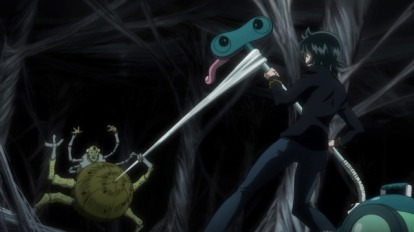 The Phantom Troupe are not good guys. There has been nothing in canon to suggest otherwise. If you add in the movie that was released a couple months back, you could say they are even bigger villains than we thought. In other words, there should be no circumstances of which we would be cheering for them.

If I were to use an example, it’s kind of like how Fox News always tries to make President Trump look good. (Or, on the other hand, how NBC, CBS, ABC, CNN, MSNBC, NPR, The New York Times, The Los Angeles Times, The Washington Post, The Huffington Post, and ESPN, to name a few, always try to make President Trump look bad.) So we’re biased toward the Troupe, and against the Ants.

But the problem with this is that we’ve seen the Troupe’s actions. They aren’t good guys. They killed an entire room of men and then vacuumed up their blood. Not to mention that they killed Kurapika’s whole clan. They aren’t “morally ambiguous” as I heard one person call them. They are totally evil. We shouldn’t be cheering for them under any circumstances.

Here’s the kicker: the episode was flat-out boring. The battles were uninteresting, the dialogue was throwaway, and the fact is that we left what was at least a somewhat interesting cliffhanger for this. This is just about the point where Hunter x Hunter loses its way. There’s still a particular character who I’m dying to hear her voice, because that might make or break the arc, but as for now, Hunter x Hunter is sliding into mediocrity.

Character of the episode: Feitan 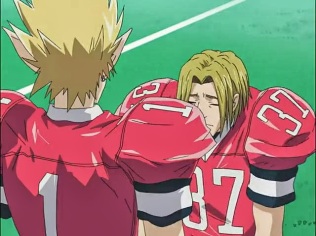 Taki commits an offside penalty, and all heck breaks loose. An offside penalty, by the way, is a rather common penalty. The penalty yields only 5 yards. The only real thing it can do to you is allow a bigger play if the offense is able to avoid being sacked and take advantage of the free play. Yet everyone acts like Taki just cost his team the game, and Hiruma orders Taki to the bench.

Then, in bizarre fashion, Taki starts blaming God for his failure, and goes to the locker room to pout. Now I’m sure the “God” Taki is blaming is probably not the Christian God, but in any case this makes no sense at all. It reminds me of a NFL game where Bills receiver Stevie Johnson blamed God when he dropped a game-winning touchdown pass. Taki then resolves to go up against God and do better.

He comes back into the game after another player gets gassed. This time, he blocks an opponent to allow Sena to score. But here’s the thing: he was actually holding on the play! He was committing a penalty here, too! But there was no flag, so the touchdown counts.

In the following episode, Sena returns a punt for a touchdown as time expires to win the game. The chances of this happening in a real football game are so remote that I can’t even put a number on it. I will say that it did happen in an Eagles-Giants game back in 2010, but in this case, Sena returned the ball from the 1-yard line and went 99 yards for the touchdown. That’s totally ridiculous.

But what am I complaining about? This is anime. And if it somewhat teaches people about the sport of football, I’m all for it.