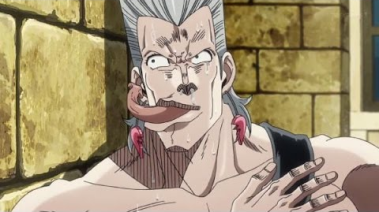 There’s an old story (like, 100 years old) by a writer named O’Henry about a guy who was up to no good. He did a bunch of bad things. Then, one day, he has an epiphany and decides to turn around his life. He’s going to make something of his life, he’s going to do good. A few minutes after he thinks this way, a cop notices him standing around doing nothing. As a result, he’s arrested and thrown in jail for loitering. It’s an ironic way of ending the story, and yes, that is the proper use of the word “ironic.”

This episode, whether the writer knew it or not, rips right from that story. Boingo tries helping Hol Horse kill Jotaro. After Hol Horse fails, Boingo decides he’s going to become a good guy. Right after that, he runs into Iggy, who then attacks him and injures him badly. It’s a fun and ironic way of ending the story.

If Jojo could stick to this type of episodes, the ones that are silly yet dramatic at the same time, it would be great. Unfortunately, from time to time, it drifts off into weird stuff. But it’s these episodes where absolutely ridiculous stuff is going on, like Hol Horse threatening guys to unscrew a pipe, and while it’s so funny, at the same time it’s so dramatic, too! This is what Jojo needs to be.

Character of the episode: Hol Horse
Yeah, Hol Horse really brought down the house in this episode. From his thing with Polnareff to the awesome scene where he’s trying to get a pipe unscrewed by exactly noon, he was great in this episode.