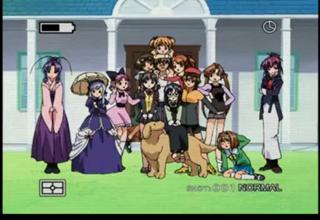 Don’t get me wrong, I LOVE happy endings, and I normally hate something if the ending doesn’t have some hope. (Catching Fire is the only exception to this rule.) But this ending was almost TOO happy. After several episodes where we get development for the last few characters who hadn’t gotten any, Wataru goes back to Tokyo, seemingly forsaking his little sisters. But then he has a change of heart and goes back with them, and his friend Akio, who tried to get Wataru to stay in Tokyo, ends up joining Wataru on the island. In short, everybody’s happy!

And after all that… it was a very uplifting series, and a super-cute one. But is it one I’d recommend? Probably not. Unless you like watching cute girls do cute things, which is actually a genre in itself these days. All in all, though, I think Sister Princess accomplished its goal. What show will replace it in my lineup? Find out in a couple of weeks!