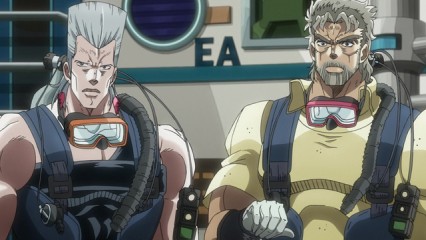 Jotaro almost goes out in the most Jotaro way – crushed between gigantic teeth, without a peep. It would have been so Jotaro to go out without saying a word, because he hasn’t said more than 10 words since we crossed the Saudi Arabian border. But he uses the brute force method to crash out of those teeth and help his pals defeat the last Stand. Jojo & pals have finally made it to Egypt!

Now the question is, what do they do now that they’ve gotten there? Are we going to have big, dramatic battles like with Kars and Esidisi? Or are we going to continue to have “Monster of the Week” battles and characters coming back from the dead? One thing’s for sure, it’s going to be an interesting ride.

Character of the episode: Jotaro