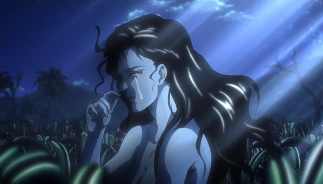 Jojo manages to make a boring old trope of a genie in a lamp giving 3 wishes into an actually very solid episode. This time on Polnareff’s Bizarre Adventure, the main character Polnareff finds a lamp and scratches it, pulling out a Stand that is like a genie. The Stand is very sarcastic and snarky to Polnareff, which is great. He asks Polnareff to make wishes, which he does. The first is to become rich, which seems to work out well. But the second two are to bring back his sister and Avdol. These don’t work out so nice for him.

This episode was a fresh take on the “genie three wishes” trope, and I loved how Polnareff subverted the trope on several occasions. I’m still waiting for the day someone is smart enough to make their first wish to be “give me more wishes,” but until then, this episode will do.