First, an announcement: Sister Princess is coming to this blog as the newest show I will be reviewing, starting tomorrow!

These episodes were great. You had the interaction between the characters as they ate a meal, then things got dicey. A new Servant is wreaking havoc, so Shirou, Saber & Tohsaka go to stop it. It turns out that the Master of that Servant is their teacher! He beats up on all three of them, then his Servant threatens to create a human sacrifice. Who’s she going to sacrifice? Shirou’s housemate Sakura!

So then it’s up to the three of them to save the now-possessed Sakura from a fate worse than death. Caster – the enemy – is doing all this magic on Sakura, but Tohsaka fights back. Tohsaka is my favorite character, of course, and I loved seeing how she fought for Sakura. Apparently the two of them are very closely related, though the series hasn’t let us in on that secret quite yet. Tohsaka rescues Sakura, but there’s still lots of fighting to go! 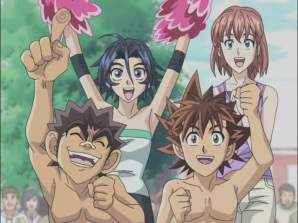 In episode 55, we have the classic “runaway” episode, where Komosubi (also known as Fatty Jr.) runs away from home and the team because he feels offended and blah, blah, blah. How many times have I seen this in fiction? It happens so often, that a character feels sorry for themselves and runs away. It’s overly predictable, and while it isn’t a bad episode per se, it’s just been done so many times.

As for the next episode, it’s a sumo wrestling contest which Komosubi wins by outmaneuvering an enormous opponent. It’s a bizarre episode, but ultimately pretty funny. Neither of these episodes had anything to do with football, though. So we aren’t any closer to the Christmas Bowl than we were last week.