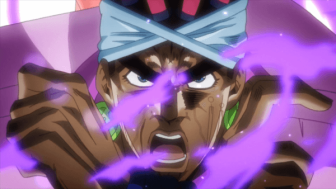 Unfortunately, we’re back to formulaic Jojo again. It’s the typical – highly muscular men (why must they all be on steroids?) go up against each other in a one-on-one battle, while three of them just stand nearby to be battle commentators instead of helping their at-risk friend. Then the bad guy is defeated, and suddenly he’s not that bad of a guy after all. In fact, this follows the exact same storyline as two episodes ago! The bad guy becomes a good guy and joins the crew! At this rate, by the time we reach Dio, there are going to be a couple dozen super-muscular men working together, all of whom have been bad guys for a while, before having the worm pulled out of their head to make them good again.

That’s the one thing I struggle with when it comes to Jojo – the battles are sometimes boring like this. In some cases they’re fun, no doubt, but in this case this was a snoozer of a battle with a totally predictable ending. Could we actually have a bad guy who doesn’t get eulogized after he’s defeated, or join the crew afterward? In any case, this episode wasn’t all that great.