Two things I took away from my first watch of Princess Nine:

This show starts off by introducing us to Ryo, a girl who’s a really good pitcher and who can strike out men. She then ends up facing the best player in Japan, who becomes the inevitable love interest, who keeps on following her around after she managed to get him to hit a ball right back to her.

Then she’s given a scholarship by a mysterious woman who is on the Board of Trustees of an all-girls school. This woman as a daughter named Izumi who is an expert tennis player. Izumi challenges Ryo to play tennis, and after Ryo figures out tennis, it is then suggested that Izumi tries out baseball. Both girls figure out the other’s sport quickly. Izumi, however, is a bit arrogant and would rather play tennis.

Then Ryo is introduced to a couple of girls on the baseball team. Only problem? They’re the only members of the team! The team has only three players, so the coach (who’s a character who’s been introduced as the “drunken umpire”) has to find more. So like Eyeshield 21, we’re scraping at the bottom of the barrel to find players to fill spots on the roster.

My only complaint about Princess Nine so far is that we’re four episodes in and we have only four players on the team. How are we going to get to the national championship in three years in only 22 more episodes? It worries me that we’re going to end up with a huge cliffhanger. I don’t know how it turns out, though, so don’t tell me. I’m just enjoying what I’ve got now. 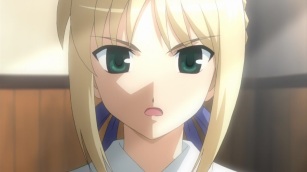 Just when I was about to drop Fate/stay night, the series came back with two down-to-earth episodes that made me reconsider. The first was a humorous episode where Shiro introduced Saber to his friends. The second was a more serious episode where Tohsaka threatens to kill Shiro, then relents after a girl is in trouble at their school.

Tohsaka appears to be the “Rio” of Fate/stay night; Rio was a character in Spiral who tried to kill Ayumu (the main character) on several occasions, yet by the end of the series the two of them were working hand in hand and could almost be considered friends. That’s the same dynamic going on here. Tohsaka is about to kill Shiro, but minutes later is helping bind his wounds.

Overall, these were two very entertaining and enjoyable episodes. Remember that I’m watching the original Fate/stay night, not the newer versions that have been put out. Thus what I talk about and what you may Google will come up as two different things; anytime you Google Fate/stay night, you get the later versions (it’s sort of like Hunter x Hunter). In any case, good episodes here.