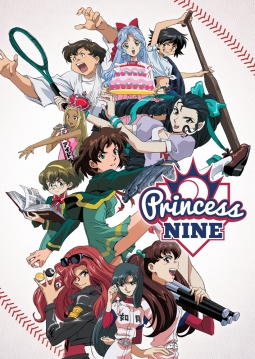 I have three announcements to make this weekend! If you’ve been following the blog, you know that I review anime on a weekday basis around here; Eyeshield 21 still holds down the Monday slot, Fate/stay night has taken over Tuesdays, and Azumanga Daioh is on “Funny Fridays.” But two series I had been watching both have come to a conclusion, so I am replacing them.

On Wednesdays, I will review a baseball anime named Princess Nine. On Thursdays, I will go back in time and watch Suzuka, a series I got halfway through before stopping. In addition, on weekends (most likely Saturdays, though the posts may come on Sundays), I am starting a new feature called “Movie Weekends.” It’s pretty simple, actually; I take a movie and watch it and then review it. These include features such as Spirited Away and Princess Mononoke, but also some more silly stuff like the 4 Bleach movies and the 4 InuYasha movies. The Fullmetal Alchemist movie(s) are also a possibility, as are the Evangelion Rebuild movies.

So lots of stuff coming up on the blog, and of course I will continue to review Hunter x Hunter and Jojo’s Bizarre Adventure here as they air on Toonami. As Konata Izumi would say, look forward to it!