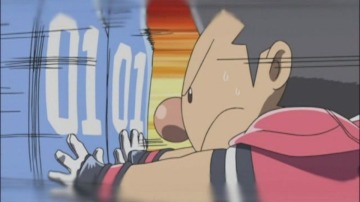 In these two episodes, we first have Kurita being a baby (as he always is) and hiding before a big game. Then we have Sena getting lost on the wrong bus to the game. To be honest, it’s a case of “not much happened.” We do have the introductions of all the teams, but it’s unclear exactly how this works. Is everyone playing on the same day on the same field in the same stadium? You do realize football games take about 3 hours to complete? You’d get 4 games in if you’re lucky. And this tournament looks like it’s got 64 teams or so.

Also, one loss and you’re out. Is that how they play American football in Japan? Imagine that in the NFL. Your season could be over after your first game. So you don’t have a regular season, you instead have everything riding on every game. This seems like a plot device being thrown in there to try to make things more dramatic, when I’d much rather see the team play a season of games and grow as they go, losing some, winning some.

We also see zero football in the first quarter of this game. It’s all the Devil Bats pushing and pushing and getting nowhere. The biggest flaw with Eyeshield 21 is that it doesn’t know how to show actual football. If it could correct that flaw, it could be really, really good. As of right now, Eyeshield 21 still is really good. It’s just not fulfilling its full potential, which I believe could be even better.