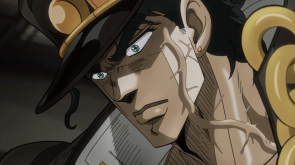 As good as this episode was, it was even better when it was over. Why? Because it confirmed that Jojo is featuring more classic rock as part of its soundtrack. This time, the Bangles. I hope this wasn’t just a one-episode thing; I’d love for this to take the place of Yes in the credits.

The basic plot is that Dio can infect people’s brains and control them. Jotaro, though, yanks out the bug that was controlling that one painter and gets him back to normal. But before anyone can breathe, Jotaro’s mother’s Stand has infected her, and there’s a nice round number of 50 days for her to live before it destroys her. How to stop that from happening? Go to Egypt and find Dio and kill him. Sounds pretty simple. Off they go, Jonathan, Jotaro and their Egyptian friend. You just know Jonathan isn’t coming back from Egypt; this is almost as obvious as Han Solo’s death in the horrible Star Wars movie.

In any case, this is a whole lot of fun. Jojo isn’t a masterpiece by any sense of the imagination, but it’s still a guilty pleasure. I shouldn’t like it, but I do.