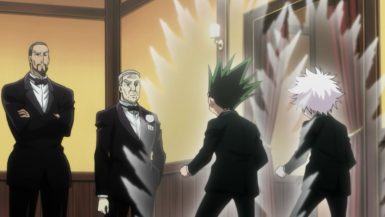 We say a sad goodbye to my favorite character and 2017 Anime Bracket runner-up Kurapika, as he and Leorio are getting put on a bus, soon to be long forgotten. It’s now the Gon and Killua show. In fact, that’s what I’m calling it from now on. Instead of Hunter x Hunter, it’s Gon x Killua, with that “x” meaning exactly what you think it does. Those two will dominate the screen for a while to come, until they are “dethroned” (quite literally).

This episode begins the convoluted explanation of this Greed Island game, which gets more confusing as each episode goes by. So far, what we know is that it’s exactly like Sword Art Online. You join the game, you’re stuck in it until you either beat it or you die, and when you die, that’s it for you.

But in order to get in it, Gon and Killua have to build up their Nen, and there’s two ways of doing that. One way is to call up other people who know Nen well like Kurapika and Mr. Wing. The other way is simply try harder. Gon and Killua use a combination of the two methods as they attempt to build up their Nen good enough to qualify for the game.

Also, remember that this is supposedly about finding Gon’s father. Soon enough, though, that’s going to be long forgotten, and the characters are going to be on some Pokemon card quest that is far from finding Gon’s father. The show jumps the shark soon, but not yet. You’ll know the moment when it jumps the shark for good. I’ll give you a hint: Killua does something so impossible so easily. Keep your eyes peeled. Once that happens, the show is doomed.

Character of the episode: Kurapika