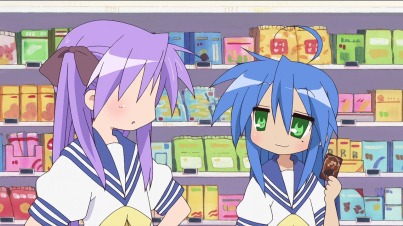 Again, it’s hard to review Lucky Star episodes because they hop from one joke to the next in rapid fashion. The one thing I can say about these episodes is that they introduce six new girls to the lineup and start giving them the focus instead of the girls we love, Konata and Kagami. So while we’ve become accustomed to jokes between the “Core Four,” these other six girls start hogging the spotlight.

Lucky Channel is its usual funny and crazy self. Oh, and there’s a clip from Episode 19 where Konata makes a comment about baseball, and it is such a true comment for anyone who watches baseball that I wish I could make a clip on it and put it on YouTube for all sports fans to see. Unfortunately, I can’t remember the exact wording she used, but it was something to the effect of criticizing the slow nature of baseball games. It’s so poignant to the world of slow baseball today. Bye-nee!

Honestly, I know next to nothing about animation studios. I know that they exist, and that’s pretty much about it. So I’ll have to go with Gainax, who made Neon Genesis Evangelion. They’re the first studio that comes to mind, and while they’re far from perfect, they win this one for me.