Probably One Punch Man. One Punch Man is a show that caters to the lowest common denominator, yet I still found a way to enjoy it. It wasn’t a masterpiece by any means, but I liked it enough that I gave it a positive score, and thus it wins this category. 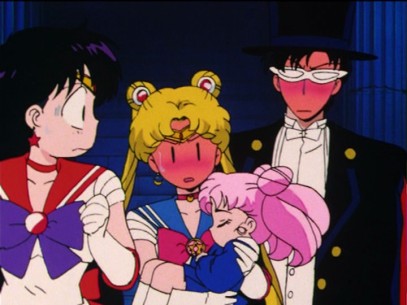 Episode 83 is that big episode – the one where Sailor Moon and Tuxedo Mask find out that they are Neo-Queen Serenity and King Endymion, respectively, and that their daughter is none other than Chibi-Usa. The reveal works pretty well, and I’d say it was a fairly good episode overall.

Episode 84 involves our villain Esmeraude, who is really just a lackey for other villains, including Wiseman, who turns her into a dragon, which the Sailor Guardians must defeat. They do so, and Esmeraude – who thought she would turn into a queen – is defeated. She’s dead. And thus we’ll never get to hear her legendary laugh again. That is truly a shame.