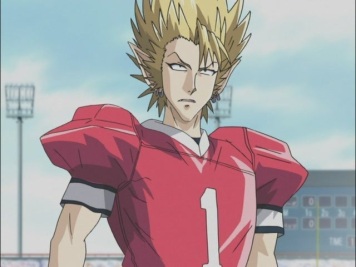 In the third episode, the Devil Bats (the name of Sena’s team) play their first game. The team gives up a field goal with 9 seconds to go, leaving them down 3-0. Then Hiruma forces Sena to play. On the final play of the game, Hiruma catches the kickoff, then laterals to Sena, who takes off all the way to the end zone to win the game. As cliche as it may seem, it was a fun episode even though we knew what would happen.

The following episode is mainly Mamori (Sena’s female friend) trying to protect Sena from Hiruma. She memorizes the rules of football overnight and manages to memorize the conversion rate between meters and yards down to the sixth decimal point. So now she’s fully entrenched in the series, although it is safe to say that not much happened in this episode.

These episodes built on what was already a good start for Eyeshield 21. I think this one’s a keeper.