The Anime Bracket begins technically with the First Four! The First Four are eight characters who have no shot at winning in the first round of the tournament, but they are necessary to bring the field to 68 characters. If you picked one of these #16 seeds to win… well, let’s just say that a #16 won’t win until it happens in real life. But in the meantime, let’s have some fun here!

Who will Rei Ayanami have as first-round fodder? It’s easy to write off Ryuk, but he was very entertaining in Death Note. The trouble is, Death Note is a show where the story itself is the main character. None of the characters matter, and you don’t grow attached to any of them, because they keep on dying. They’re simply tools. Fans of Game of Thrones and The Walking Dead need to watch Death Note first so they know what they’re in for. Lots of deaths, no character attachments.

Mamimi is the 68th and final character in the field. She wouldn’t be in if not for FLCL being required as an automatic bid, and there’s no other FLCL character I care for. FLCL isn’t that bad, really, but I didn’t like 5 out of 6 episodes (episode 4 was the only good one).

Why am I so low on Pokemon? It’s nothing against the series; everyone loved the first season. The problem is that a) it’s so long ago since I watched it and b) the series goes way downhill after the Orange Islands (with a brief interlude of positivity in Advanced Battle). Meowth is one of several I could have picked here.

In the end, I just have to go with the cat.

Yikes. Had there not been a “MAIN” Region, it’s possible that these two could have been #67 & #68. Neither character is very memorable, and neither show was very good.

In any case, both of these characters were voiced by the same English voice actress, Jad Saxton, who also voiced another character in the field of 68 (Karin Ishida from Shangri-La). I’m going with the one who has omelet all over her face.

I would hurt myself with knives before I’d put Banagher through to the second round of this tournament. (If you don’t get the joke, listen to “Into the Sky” by Tielle.) But Banagher stands a chance, since he’s going up against the “best” of Trinity Blood.

Trinity Blood was a very boring series, with the character who I expected to be the one I’d like – Esther Blanchett – being a terribly boring character. Abel isn’t much better, to be honest, but because it’s all boys here, he gets in.

I’m going to give a slight advantage to Abel, who will advance to play Kurapika.

Those are the First Four winners! The #1-#16 matchups are now as follows:

Stay tuned as Thursday we begin the bracket in earnest! 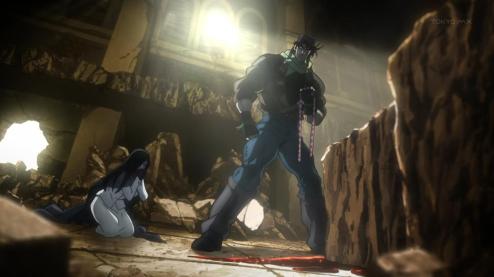 Caesar’s backstory is explained in a flashback, which is a giveaway sign that he’s about to die. Sure enough, he does die, at the hands of Waamu. But before he dies, he manages to get the ring that includes the antidote for Jojo. That means that the poison rings should no longer be a problem for Jojo, and thus we’ve solved that little conundrum.

But Jojo and Lisa Lisa break out bawling over Caesar’s death. Jojo can’t even find where Caesar died, even though there is a super-obvious block shaped like a cross laying right in the middle of the room.

Sadly, I couldn’t get into Caesar’s death as much as those two did. However, I did think it was a rather good episode. I just don’t really care that Caesar died. He, like his grandfather, was disposable. The story about his father was nice and all, but it still couldn’t get me to feel a bit of sorrow that he was now gone. I actually was kind of glad he did die, since it made the episode better, rather than him crawling out saying, “I’m still alive!” and then pulling out some miracle attack to destroy Waamu.

Overall, it was a good episode, I don’t have any complaints.