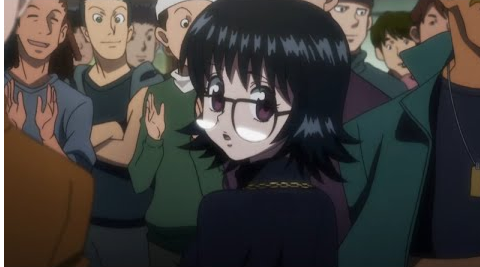 The whole gang is here! Gon and Killua meet up with Leorio while trying to buy a cell phone. Leorio recommends the “Beetle phone,” which about 40 episodes from now becomes a plot hole (during the Chimera Ant arc that ruined Hunter x Hunter). The three then hang out and try to make some money. They decide the best way to do that is to have Gon arm-wrestle opponents for 10,000 Jenny each. Since Gon is unbeatable (at least that’s been established), he only needs to win 88,900 more arm-wrestling matches to reach the number necessary. Considering that there are 86,400 seconds in a day, he would have to win just about one match per second for an entire 24-hour day to reach that number.

All that gets thrown out the window once Shizuku steps up to the plate. Shizuku is easily the best Phantom Troupe member, as you’ll find out later. She challenges Gon to a battle of arm-wrestling, and Gon only barely wins using his full strength. She then reveals that she used her right hand, and she’s left-handed, so she probably would have won had she used her better hand.

In the meantime, Kurapika is busy preparing for the auction for Neon. Neon throws a temper tantrum because she’s not being allowed at the auction, but it’s for her own good. Nothing exactly happens yet, however. This is still just setup for the big incident to come. Kurapika and Melody pass the time by telling each other about themselves. They’re so cute together. I think I already ship them.

Melody is the way she is today because she heard the Sonata of Darkness or something like that. See, Kurapika is a great guy. He doesn’t judge a book by its cover. You just wait. Once Melody finds a way to go back to normal, she’ll become a smoking-hot blonde, and Kurapika and her will make awesome babies. I think this deserves a fanfic.

Trust me, this arc’s going to get really good. It just takes a while to set up.

Character of the episode: Melody